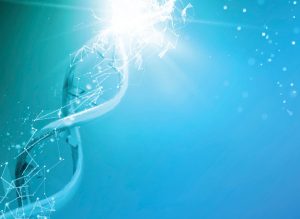 What if there was a way to repair damaged pieces of genetic code and prevent the development of disease? Well, now there is!

CRISPR-Cas9 is a unique technology that allows geneticists and researchers to edit parts of the genetic sequence by removing, adding or altering sections of DNA. The system includes two key molecules: an enzyme called Cas9 and a piece of RNA. Cas9 acts as a pair of scissors that cuts two strands of DNA at a precise location so pieces of DNA can be added or removed. The RNA, called guide RNA, acts as a scaffold and “guides” Cas9 to the correct part of the genome.

Scientists are using CRISPR-Cas9 to study forms of glaucoma that are caused by a genetic mutation. Glaucoma is characterized by elevated inner eye pressure, and it is one of the leading causes of irreversible blindness. A group of researchers led by the University of Iowa found that repairing a mutation in a protein called myocilin can prevent elevated inner eye pressure. Myocilin is located in the trabecular meshwork, the part of the eye that regulates eye pressure.

The researchers used CRISPR-Cas9 to disrupt the mutant myocilin gene in the eyes of mice. This halted the production of the mutant protein, which prevented spikes in intraocular pressure. The results were clear: applying gene therapy to correct the myocilin mutation prevented the development of glaucoma.

Val Sheffield, M.D., Ph.D., is the Carver Chair of Molecular Genetics at the University of Iowa and an investigator with the Wynn Institute for Vision Research at the University. She also serves as senior author of the study. According to Dr. Sheffield, using CRISPR-Cas9 to study myocilin’s effect on glaucoma expression has been groundbreaking. “As scientists we don't want to just discover a diseased gene; we want to understand what the gene does and, in this case, have a better understanding of glaucoma so that it can be more effectively treated,” she said. “No one knows what this gene does, except that its mutant form causes glaucoma.”

Even though this study was only performed on mice and cultured human eye cells, it has tremendous implications. Currently, there is no cure for glaucoma, and the disease affects 2 percent of people over the age of 40 in the U.S. If future CRISPR-Cas9 studies have positive outcomes, we may see this technology used in human studies in the near future (Source: Science Daily).